The History of Our Country

Our country came about, when (before he was king), our King came up with the idea during a cancelled PE lesson, on the 24th of May, 2012. A few volunteers volunteered to join this new country, and thus, New Delania was born. The next day, King Marcus claimed Marie Byrd Land, in Antarctica, and it joined New Delania. Later that week, New Delania changed its name to Innhau, coming from the German words meaning room inside the house. The provence or states as they are known in Innhau are Bedroomia, Kidsroomia and Marie Byrd Land (part of Antarctica).

A few days later, the Democratic Republic of Hamalia, became active. As this was lead by President HBJ Fairlie, a classmate of HM Marcus I, they were instant allies, and to this day, the Innhau-Hamalian Pact is still in place.

Below L-R: The declaration of independence while Innhau was still New Delania, The Innhausian flag and the royal seal/ country coat of arms 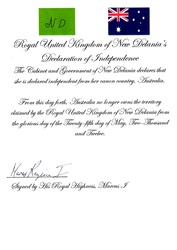